My experiences at Khalis Foundation – from a hackathon to a permanent collaborator. 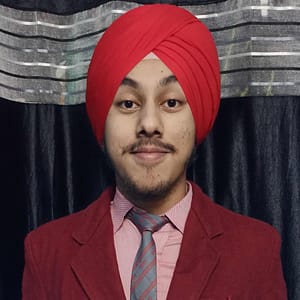 It all started when my curiosity was piqued after noticing SikhiToTheMax being used in every Kirtan Samagam in 2019. I went on to research this platform and I believe it was the best decision of my life. I have experienced the journey of SikhiToTheMax from a slow and steady engine to such a fast and vast Gurbani engine. Additionally, I hopped into explore significant Sikh Tech, and found more incredible projects by the Khalis Foundation, to my surprise, they have been engaging with fellow developers via Khalis Incubator program which opens every year. Without a doubt, I signed up to get Gursikh exposure and know the dev team behind SikhiToTheMax, Sundar Gutka and countless other projects.

Fortunately, in 2021, I got to interact with the respected board members in an interview to see where I stand as per their needs. A word about me, I was just a high school student about to graduate with basics of Python, a lot of creativity and the urge to learn as a Sikh. Surely, there were more proficient developers who got selected but it did not just end up there, I got a chance to contribute Voluntarily to the renowned non-profit in a Hackathon which happened just a week after I met them, what a wonderful blessing.

Out of the ideas presented at the Hackathon, I chose to contribute to Python wrapper for BaniDB, named BaniDB.py, basically a packaged software which can help developers make Gurbani Apps using Python. It was at this moment, I felt far more useful and innovative than ever before, for the first time in my life.

Basic idea was to expand the domain of Sikh Tech by including Python (easiest and most trendy programming language) to let new developers experience the simplicity of access to Gurbani through BaniDB API. I learnt about creating and building an actual software package which can help users get Gurbani data very easily was just another level of bonanza for a high schooler like me.

“Life has got all those twists and turns. You’ve got to hold on tight and off you go”, the twist that changed my life from a volunteer to a paid professional was when I was about to start my bachelor’s degree and needed a supporting part-time. With the blessings of Waheguru Ji and the blessed vision of the Khalis Foundation in assisting talented people to spread the message of Sikhi through Youth, I was entrusted as a Software Engineer at the reputed non-profit. It did not just boost my spirits, it even allowed me to maximize my skills and gain experience while also giving back to my Panth.

BaniDB.py has been quite an adventure for us. We continued to document, which was another way of reevaluating the whole project and making sure it could meet developer expectations.

Nevertheless, being equipped with bringing ideas to reality, I got the seva to start a phenomenal project to ease the access of Gurbani by creating a Google Assistant App for SikhiToTheMax. Being the first in the field has its own appeal. This project is the first virtual assistant to speak Gurmukhi, and the best part is that the feel of Gurbani is kept. It was ideated as a use-case of BaniDB.py which makes SikhiToTheMax handier and on-the-go for busy users.

Fun Fact: You can test it right now on your Google Assistant, by saying “Talk to SikhiToTheMax”

(If you are Apple user, don’t worry, you will have one of this kind available, soon 😉)

As you know how Khalis Foundation surprises us with various Awesome apps and their updates, we recently released v9 update for SikhiToTheMax to make your experience better.

At this exact moment of time, I realized how this journey went all the way from a normal SikhiToTheMax user to being a part of the dev team of it and other upcoming wonders. I am still unable to express my full gratitude and thankfulness to Waheguru ji for blessing me with such great achievement with Khalis Foundation.

I envision Khalis Foundation as a non-profit organization that profits from eternal bliss by spreading the message of Gurbani via technology and encouraging the youth, to prove that they are one-of-a-kind.

When worked on, the Gurbani treasure truly shows its impact, Khalis is a stellar example.

May Waheguru ji bless everyone with Chardikala.